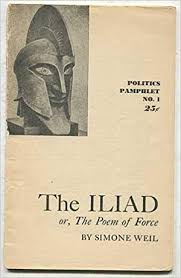 Force, the True Master of War : Simone Weil’s The Iliad or, The Poem of Force

“The true hero, the true subject, the centre of the Iliad is force. Force employed by man, force that enslaves man, force before which man’s flesh shrinks away.”

So begins Simone Weil’s “The Iliad or, The Poem of Force”, an incredible essay that will change the way you look at war forever.

I’ve written before about Weil (see my two blog posts, Part 1 and Part 2, which survey her fascinating life). But just because I’m focusing on one essay doesn’t make things any easier. Why? Because just as her own life has a vastness few are lucky enough to experience, this essay, too, has a vastness about it. You walk away with the sense that you have not only read a profoundly interesting piece of political philosophy, but you now possess a new lens through which to evaluate wars past, present, and future.

War, in it’s most general sense, is the main focus of this work. But the reason the Iliad plays such a crucial role here is that, to Weil, it is the most honest depiction of war ever presented in Western literature, or thought for that matter.

And what do I mean by honest? According to Weil, the Iliad doesn’t bask in the supposed “glory” of war. No, the slaughter, mayhem, madness of warfare, with all the blood and pain and death that comes with it are presented in stark terms, exactly as they are. On the other hand, the victims of war are not portrayed with extreme sympathy to the point of finding a nobility in suffering. Rather, she notes that the victims – the enslaved, the dying, those left behind, etc. – are here shown in all their wretchedness, as the sad consequence of the collective insanity that is war. If there is any emotion at all, it is displayed in an overall bitterness that Weil notes makes this epic utterly unique, and also in the way what is lost – the tranquility that came with peaceful times, the joys of being home and among those who you love and love you – is contrasted with the brutal reality of the war itself.

But the most important thing that the Iliad  gets right is its depiction of force.

Force, for Weil, is – as the opening sentences make clear – the real hero of this epic and, furthermore, the true driver of historical progress (though the word progress is a bit problematic, as history isn’t, for Weil, progressing towards some endpoint. Rather, it is the true driver of history unfolding). Force is that which compels the soldiers on both sides to fight on and on despite the many opportunities to break free. It is also what disfigures the souls of the conquered as they come under the vicious rule of the conquerors. In both cases, force distorts a human being into – and this is the vital – a  thing. A human being’s individuality, their ideas, hopes, dreams, all such things become meaningless in war. A human comes part of a monstrous machine, the most pitiful of which think for a moment that they are themselves masters of force. But it is only for a moment, for Weil points out that every character in the Iliad  gets to experience a feeling of triumph, only to have that triumph stripped away sometimes in the next few lines.

Force, for Weil, cannot be mastered. On the contrary, it masters a human being, makes it act contrary to all reason, and proceed in a manner that is only guaranteed to bring about more suffering and, even worse, more of the very warfare that causes the suffering.

For as long as humans can fight, force will compel them to, and if this seems like a strange situation, or even unbelievable, then I recommend a paragraph near the end of the essay, where Weil herself explains why such a situation  will seem inconceivable to someone outside the system of force, but for those who are within it, there is no other way to think but in terms of continued violence.

This is but a brief sketch of an essay that you should not only read but reread and then reread again. It is one of the most powerful meditations on war ever written and, as a bonus, a perfect introduction to the work of a teacher/activist/philosopher/mystic who was one of the most important thinkers of the twentieth century.

Note: I have Existential Comics to thank for coming across this essay. I highly recommend reading the comic but also check out the links to The Partially Examined Life’s discussion of the essay, as well as some of Weil’s other work (Part 1, Part 2)

***Also, on an unrelated note, I’ll be releasing an updated version of Matt’s Super Secret Elite Reading Course sometime in December of this year in an effort to include the best of the two hundred or so books I’ve read since I put that list together and thus make it even more impractical to complete.

But I have even better news, too – I’ll be simultaneously creating an ULTRA Super Secret Elite Reading Course that will only be available to fans of this blog who demonstrate their fandom in some as-yet-unknown way (though it’ll probably involve helping me promote this blog, commenting on posts, or something like that).

View all posts by workingtitlebookshop